TRY IT NOW
The Fight Over Google Product Search
Google Shopping is one of the most lucrative and yet controversial ecommerce tools to come out of Mountain View. The product is not only highly profitable for Google, but also for the many merchants who get sales through the tool. Given its immense power, Google Product Search has attracted its fair share of criticism and fines from regulators.
The battle over Google product search is just another front in EU regulators’ fight against Google for its perceived antitrust actions. From a $5 billion fine over Android antitrust accusations, to a €2.4 billion fine over Google Shopping, regulators have sought to penalize Google for its actions.
Below we explore why this is a fight that matters for merchants of all kinds, and whether Google product searches are, indeed, unfair.
Why Google Product Search Matters For Retailers
Google’s search algorithms wield enormous influence over the consumer public in many Western countries. The company owns a disproportionate share of the search traffic market as well as revenue. According to Smart Insights, Google’s share of the global search market is over 75%.
Other estimates claim that Google dominates the search market even more heavily than commonly thought. For example, StatCounter claims that Google has a market share in the search market of over 90%.
For Europe, in particular, this dominance is sharply pronounced, with StatCounter assigning Google a 93% share of the European search market. The full figures read as follows: 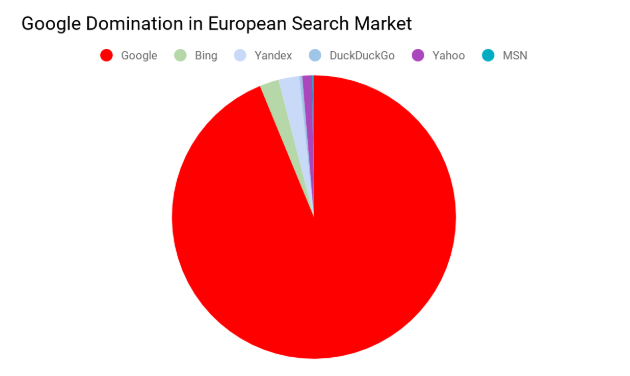 Product search results are a significant portion of this consumer traffic. According to Moz analysis of Google search results, Google Shopping (paid listings) appear in around 20.8% of all search queries.
Google Shopping is a program run by Google that allows advertisers to have their products shown at the top or sidebar of the search engine when web users search for products. Some features of Google Shopping are free, but to appear in premium search real estate, advertisers must pay.
Criticisms Of Google Shopping
The role of Google Shopping is a target for sharp criticism from Google’s rivals and merchants who feel that it puts their own product listings at a disadvantage.
In particular, Google Shopping is at the center of the European Commission’s €2.42 billion ruling against Google for abusing its search dominance.
Critics of Google Shopping say that the search giant has harmed competitors, and ultimately, consumers, in multiple ways.
For instance, in the wake of the European Commission’s ruling, some rivals praised the decision, saying it was time to curtail Google’s gatekeeper role. The ability of Google to influence what millions of people in various countries see or read online gives unusual power to a single corporation.
In addition, conferring an advantage to Google Shopping over competing product comparison sites is seen by many rivals as unfair. Google has pointed out that product sites like Amazon and eBay, with their review systems, exert far greater influence on consumers’ purchasing decisions.
Without selling anything itself in its product listings, Google, perhaps ironically, finds itself in the dock for prejudicing rival retail operators of sales opportunities.
Are Product Searches Unfair?
There is ample data behind the European Commission’s ruling against Google’s product search results. The Commission compiled over 5.2 TeraBytes of data comprising over 1.6 billion Google Search results.
The Commission also relied on other data, including:
Why Rivals and Regulators are Convinced it’s Unfair
Google’s search results are arrived at via a proprietary algorithm which remains a commercial secret. Its efforts to make product search results, therefore, must be judged in light of a large body of circumstantial evidence, which might lead to inaccurate judgements.
In its original press release, the European Commission levelled detailed criticism against Google practices that it alleged placed Google Shopping at an unfair advantage. These include:
Sticking Points
There is tremendous opacity around how Google would actually ensure fairness in its product listings. This is an important sticking point because all parties (regulators, third party product sites, and Google, along with Google Shopping advertisers), have diverging interests.
Coming up with a solution that makes one set of stakeholders happy is as likely to leave the others crying foul as to make someone happy.
The European Commission, aware of this difficulty, offered Google no specific instructions or mandates other than to devise a solution.
From Google’s point of view, it’s only natural that this ruling served as a historically conflicting ruling. For one, it’s not clear that there are measures preventing the European Commission from fining Google again in the future despite not giving the company clear instructions on how to implement the solution.
Google may not be happy with the ambiguous mandate from the European Commission, but its rivals are likely to be unhappy as well. After all, the fines may address past wrongdoing, but the lack of a clear standard against which the implementation can be tested makes it hard to verify compliance.
How To Gain An Advantage In Google Product Searches
Despite the legal battle over Google product searches, given its dominant share of the search market, Google remains a key consideration for retail success.
The rapid increase in online searches for products, as well as online shopping preferences, make it necessary for retailers to compete in Google product searches.
What Factors Does Google’s Algorithm Weigh?
Retailers need to invest in their online product presence and to understand how Google’s algorithms favor certain practices.
SEMRush has compiled some of the factors that Google takes into account in search engine result pages (SERPs), including:
Understanding all the SERP factors will help you optimize your product pages to compete for Google traffic.
Optimize for Google Shopping
Google Shopping is a service that retailers need to become familiar with and to use. You can get started by creating a Google Merchant Account. This will give you the opportunity to provide Google with search-relevant data about your products.
Make sure to provide up to date product data feeds as Google prefers to show searchers the freshest and most accurate product data.
You should also look into advertising on Google Shopping. This can vastly improve your conversion rates and lead to higher product sales.
Google Shopping listings are particularly prominent on mobile phone search results, making it likely you will be able to reach mobile traffic from the service.
Winning the Google Product Search Debate
The debate over the fairness of Google product searches is likely to remain for the foreseeable future. It pits Google against regulators and other comparison shopping sites. Product retail giants like Amazon and eBay are players in this debate, as are retailers who use Google Shopping.
What is clear, however, is that Google is powerful enough in the product searches market to make it deserve a good look by any retailer. Understanding how Google’s algorithms affect product listings in your market will help guide you to the optimal moves for your retail business. Finally, getting on Google Shopping can offer you new opportunities to bring buyers into your store.
SHARE: