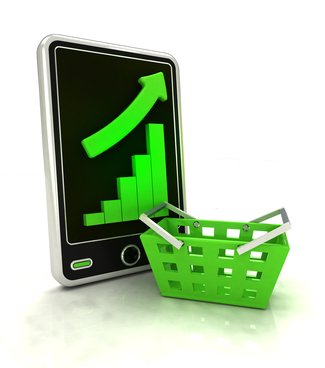 Mobile commerce, or m-commerce as it is commonly known in the industry, is changing the shape of the online retail market. In order to maintain a competitive advantage, the retailers who adapt the most quickly to coming trends typically have the most to gain - but gambling on the wrong trends, or trends
that fail to emerge into the mainstream, can have disastrous consequences. There has been some speculation in the past that the time of m-commerce hasn't yet come, or that it's never going to materialize into a properly viable channel, but recent reports seem to be finally quieting the naysayers and putting the matter to rest once and for all.

A recent study commissioned by online coupon giant RetailMeNot indicates that at least in the United Kingdom, mobile shopping is here to stay. The study forecasts that over the course of 2014, customers in the United Kingdom will spend nearly £8 billion online using their mobile devices (smartphones and tablets). This is quite high even by the standards of the rest of Europe, which as a whole is forecasted to spend nearly £20 billion in 2014.
Interestingly, Europe's overall m-commerce spending is growing at a slightly slower rate than that of the United Kingdom, as in 2013 the m-commerce spend was just shy of £11 billion, making for an increase of nearly double. In the United Kingdom in 2013, the m-commerce spending stats showed sales of £3 billion pounds less, roughly £5 billion.
This is in large part driven by the fact that smartphone adoption is much higher in the United Kingdom than in the rest of Europe, making it a perfect testing ground for companies looking to experiment with m-commerce solutions among a large population who are comfortable making such purchases. 28% of all smartphone users in the United Kingdom made an online purchase with their mobile device in 2013, the highest in all of Europe, just above Germany who placed second with 27%, and well in advance of third placed Sweden, who measured in at 21%.
Naturally, m-commerce adoption is an uphill battle as retailers experiment with solutions that respond to the evolving needs and desires of consumers who are still themselves discovering just how it is they want to use their mobile devices. Any retailer who hopes to maintain a competitive advantage had better pay close attention to evolutions in the market space, because whoever picks up on the best new trends will be far ahead of the pack.
SHARE: