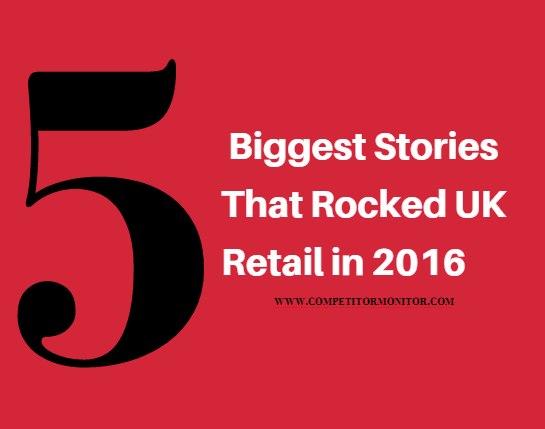 TRY IT NOW
In a year where the UK voted to leave the European Union, price wars between retailers became fiercer than ever and consumer appetite for value showed no signs of slowing down, the 2016 retail sector could be best summed up as an unpredictable rollercoaster experience.

The rise of digital proved a game changer for most retailers not just from the perspective of consumer preference but also as an enabler for pure play retailers to really up their game, turning on the heat and increasing pressure on brick and mortar retailers massively leverage and maximise omni-channel opportunities as they all strive to deliver more personalised and frictionless consumer experience to increase in sales volumes and customer loyalty.

What happened in 2016 that rocked the UK retail sector? Well …..

The online retail phenomenon was never out of the media spotlight in 2016 which is not surprising as they ventured into bricks and mortar for the first time in their history as well as introducing innovative new features to deepen consumer engagement and differentiate themselves from other retailers in their operational territories.

2016 saw the creation of 3,500 jobs across their Amazon head office, web services, fulfilment, research and customer service centres. Just like their commitment to growing their human resource, Amazon also demonstrated their commitment to innovation with the launch of “AmazonFresh” and “AmazonRestaurant” as they began their assault into new market sectors, taking on established leaders such as Ocado and Deliveroo.

Let’s not forget the Amazon’s venture into the Internet of Things (IoT) with their introduction of the ‘Amazon Dash’ button where customers can re-order any product with the dash button directly from Amazon nor can we ignore their ‘Amazon Echo’ product, the Alexa voice service that’s answers questions, plays music and control smart devices from voice commands.

Living up to their pioneer status, the retail giant ended the year by introducing their Black Friday sales two weeks earlier than their competitors making nearly 100,000 price changes in their toys category between the 21st and 28th November 2016 but surprisingly, over 44 percent of these changes were price increases.

2. The Demise of BHS

2016 saw the curtains fall for the last time as 88-year-old high street department store BHS finally shut its highstreet operations. Founded in 1928 by American entrepreneurs, British Home Stores (BHS) aimed to emulate the success of Woolworths. It’s listing on the stock exchange in 1931 was a key growth catalyst accelerated through its merger with Habitat and Mothercare in 1986 delivering  continued success, leading to a private acquisition by Sir Philip Green for £200m in 2000.

The department store, once a visible giant on most UK high streets allegedly collapsed after 7 years of trading with heavy losses and £1.3bn in debt, leaving 11,000 staff seeking alternative employment as well as a pension deficit of approx. £571m, affecting nearly 20,000 people. By 2015, BHS had 8.2 percent of clothing shoppers visiting it’s stores and a 1.4 percent share of the clothing market compared to 13.4 percent and 2.3 percent respectively in 2000 with the average BHS customer being 49 years old.

With a huge pension burden, dwindling customer footfall, changing consumer tastes, inexperienced new owners, high rents (nearly 65 percent higher than average in some cases), and the massive debts owed by the business, the health of the business was terminal due to the unsustainable position of the business.

The June 23rd 2016 vote for Britain to exit the European Union seemed an unlikely verdict whose reality spelt huge uncertainty for the UK economy, with a direct impact on all areas of the UK retail economy. The Brexit decision saw the pound it a 31-year low against the dollar and a 5 year low against the euro amid fears of mainly based around an unclear future.

According to the Centre for Retail Research (CRR), retailers in the post Brexit era will need to “maximise the digital opportunity, be more agile and more responsive to change ” to minimise the Brexit impact on their retail business. The weaker pound could also increase demand for UK sold products and services making the UK a more affordable shopping destination for tourists.

Experts believe that intelligent UK retailers can still win big regardless of the Brexit vote. They commented that freedom from the EU presents retailers with the option to re-assess their supply chain, sourcing products and materials from their preferred markets and minimising the effects of EU set import tariffs on the business.

This being said, the UK retail industry appeared to weather the storm of the short term impact due to the weaker pound, with retail sales increasing by 1.6 percent in July. According to the Office for National Statistics (ONS), total retail sales increased 5.9 percent for the same period in 2015 with all sectors demonstrating growth with non-food retail making the most contribution to over retail sales volumes. Watch and jewellery sales saw a 16.6 percent increase on the year with online consumer spend also experiencing a 16.7 percent increase on July 2015.

The American Thanks Giving shopping phenomenon first introduced to the UK by Amazon in 2010 did not fail to excite millions of UK consumers on the hunt for deals and bargains especially with Christmas fast approaching and many parents looking to bag the best toys at the best price.

Black Friday 2016 still proved a huge success hitting £2.9 billion in the UK, breaking several records along the way. The now established retail ‘occasion’ caused an online frenzy with over £1 billion spent by UK consumers on discounted clothes, technology and toys, up 36 percent on 2014.

The discount sportswear retailer made UK media headlines in 2016 for all the wrong reasons as it’s owner and founder Mike Ashley was put under the spotlight for alleged “Victorian” working conditions as uncovered by The Guardian.

The billionaire owner came under intense scrutiny as the Guardian investigation highlighted “appalling working practices” with the owner treating “workers as comodities rather than human beings”.

This investigation also brought the widely used ‘zero hour contract’ to the forefront of the retail agenda, where nearly one in five workers (15,000) were contracted to the organisation but with no guarantee of set weekly or monthly hours, making them completely open to exploitation by the organisation in question especially with Mike Ashley admitting that his company had broken the law by paying employees less than the national minimum wage.

Figures from the Office of National Statistics (ONS) identified 72,000 (1.8 percent) of UK’s retail workforce were on zero hour contracts.