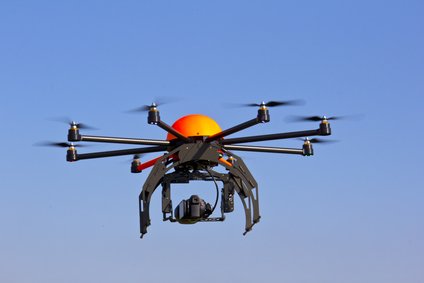 In the ever-changing world of online commerce, the one unavoidable real-world concern is that at some point, a physical product has to be shipped out the customer. A number of different types of solutions have been posed for this problem, and we've discussed a number of them in the past. Centrally-located pickup stations where customers can retrieve their own packages, Sunday deliveries, free shipping deals to tempt buyers, and most recently, online retail giant Amazon has even begun to test out the feasibility of using their own Amazon branded trucks to complete deliveries in major cities in Europe and North America. But never being satisfied with the current system is one of the hallmarks of CEO Jeff Bezos' business philosophy, so he's looking even further into the future.

Even though it sounds like it belongs in a science fiction story, Amazon is currently testing out the viability of using miniaturized flying robotic drones for delivery. Yes, you read that right. The small drones, known as 'octocopters', will be capable of delivering a package weighing up to 5 pounds (2.25 kg) within a radius of up to 10 miles from your friendly neighbourhood Amazon fulfillment centre. The goal? Delivery of packages within a 30 minute time window.
Once the story first broke over the American Thanksgiving weekend, it rapidly went viral and could be found on virtually every single news and social networking site. Speculation began almost immediately that this was actually carefully calculated timing by Bezos, which resulted in  huge amount of free advertising just in advance of the much-vaunted Cyber Monday, the digitally-based counterpart to Black Friday.
Naturally, the drone deployment project is still in the very early testing phases, and a huge number of hurdles will have to be cleared before the devices are operating legally in the United States, but if the program is successful, the incredible convenience is likely to reshape the entire e-commerce industry. Amazon is hardly the only company interested in the applications of this technology, although they are certainly one of the largest. In Australia, textbook rental service Zookal is experimenting with using drones for rapid delivery, and in China, SF Express, a large delivery company, is also testing out drone deployment for more general courier services in the city of Dongguan, in the Guangdong province.
Whenever they are finally cleared for widespread use, the face of e-commerce retail will be changed forever, as rapid, personalized deliveries will be available for a large number of household and convenience items that are currently impractical to purchase online. As the system grows, the technical hurdles of weight and speed will also no doubt be improved, opening the door for even greater possibilities.