Amazon Prime Day - What to Expect

TRY IT NOW
When is Prime Day in 2019?
One of the year’s biggest online shopping days is on the Horizon, and retailers are excited to get in on the action. We expect Prime Day to fall somewhere during the month of July, possibly Monday the 15th, or later. In 2018, Amazon Prime Day was on Monday, July 16 and lasted a full 36 hours.
Amazon will typically announce the exact date for the shopping mega-event a few weeks ahead of the actual date. Anticipation is already building up for Amazon Prime Day 2019.
This year’s event promises to be an even bigger shopping day than witnessed a year ago.
Ranking of Prime Day Among Big Shopping Days
Prime Day now ranks as one of the top shopping days in the US and has grown beyond US borders.
The list of countries in which Prime Day deals are available has expanded and now includes:
...and many more.
According to Visual Capitalist, Prime Day compares well with big shopping holidays such as Black Friday and Cyber Monday in revenue.
In the U.S., for example, Prime Day in 2017, at $1 billion in revenue, was almost as third as big as the preceding Black Friday, which had revenues of $3.3. billion.
History of Prime Day
Unlike other shopping events such as Black Friday and Cyber Monday, Prime Day has a singular focus on Amazon. Amazon Prime Day began as a commemoration of Amazon’s 20th anniversary in 2015.
Amazon offered special deals on Prime Day as a reward for Prime subscribers.
Behind Prime Day, however, there is more than just community-building. According to TechCrunch, the event also aims to boost Amazon’s bottom line.
For an estimate on the population of Prime subscribers in the US alone, Fortune puts the figure at 101 millionfortune.com/2019/01/17/amazon-prime-subscribers/. Amazon Prime subscribers are an important group for the company since they tend to spend bigger than non-subscribers. Data from the same report show that Prime members spend, on average, $1,400 annually with Amazon, compared to $600 for non-members.
The Numbers Behind Prime Day
Prime Day revenue is one of the metrics that best show the steady progress Amazon has made with this discount shopping day.
Revenues have grown from a total of $0.9 billion in 2015, as estimated by Digital Commerce 360, to $4.19 billion in 2018. 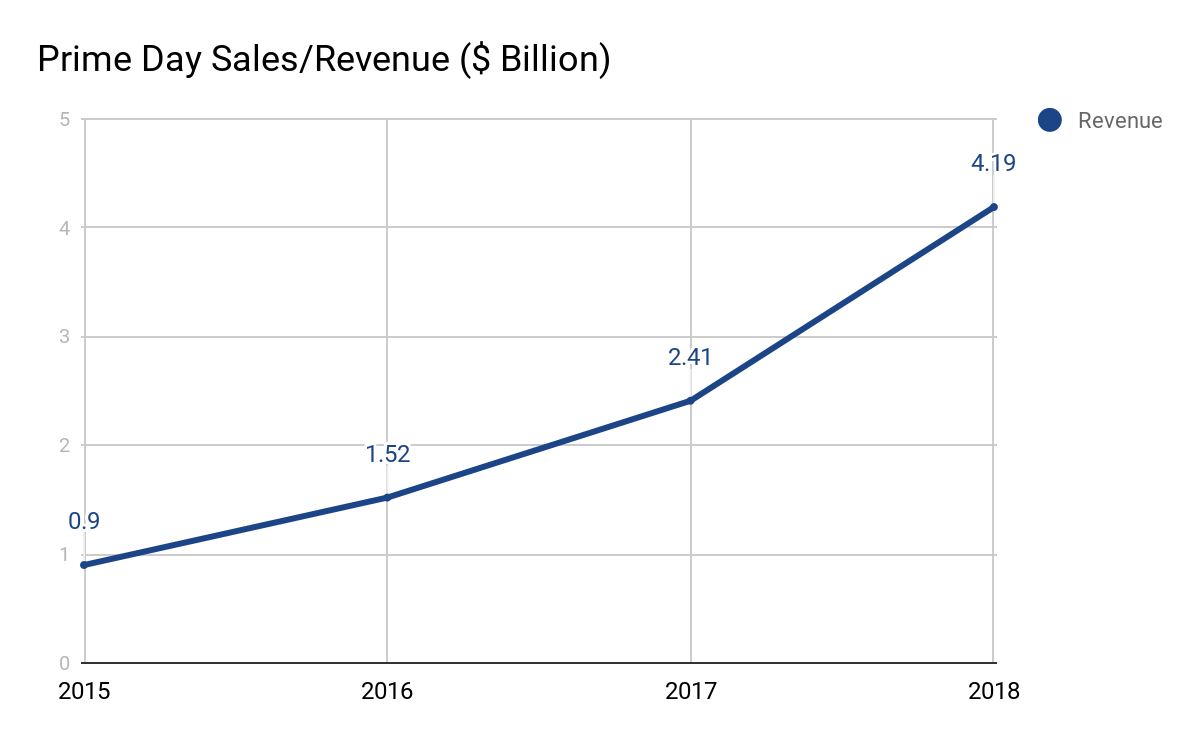 Chart: Amazon Prime Day Revenue 2015-2018
In 2019, if the current uptrend persists, we can expect strong revenue, at or above the $5 billion mark.
Consumer Awareness
According to a 2018 McKinsey study, consumer awareness about Prime Day was high in 2018. From a survey of US shoppers, McKinsey found 80% awareness about the Prime Day shopping event.
More importantly, Amazon’s promotional activities helped in bringing in first-time Prime Day buyers. The McKinsey study points out that around 52% of buyers in 2018 had never participated in Prime Day discount shopping before.
What Drives Prime Day Sales?
Amazon spent significantly on Prime Day advertising in 2018, according to Digital Commerce 380. This included $5.2 million in TV ads and up to $50,000 a day in paid search ads.
Beyond advertising, Prime Day sales benefitted from the high adoption of Amazon Prime. Over 65% of US households, for example, have an Amazon Prime membership. This makes it easy to raise awareness about Prime-related events and promotions.
Popular Categories for Deals
Electronics and consumer technology devices tend to outperform on Prime Day. For 2019, we can expect that smart gadgets will be among the best-sellers. Below, we look at the biggest winners in 2018 and which products should do well in 2019.
Past Winners
According to Amazon’s data on the 2018 Prime Day event, the Amazon Fire TV Stick with Alexa Voice Remote was the absolute best seller. This smart TV remote sells for a regular price of $39.99.
Top-selling items on a geographic basis varied from country to country. Highlights included:
Deals to Watch in 2019
We can expect last year’s best-selling categories such as Amazon’s Alexa devices to do well this year. Standout performers are likely to include:
Alexa-enabled devices, including speakers, 4K TVs, and other smart home tech should also put in a strong run.
In 2018, for example, the Sony 55-inch 4K Ultra HD Smart LED TV was discounted from $799.99 to $478 for Prime Day. Likewise, The Verge reported similar deals on tech from manufacturers like Samsung and LG.
Beyond deals, Amazon has been making enhancements to Amazon Prime which will likely improve the experience on Prime Day.
According to an NBC report in April 2019, the company plans to shorten default shipping time for Prime members from two days to one day.
More consumers will likely get their Prime Day deals within 24 hours.
How to Boost Retail Sales on Prime Day
Other retailers, not just Amazon, can take advantage of Prime Day shopping. Planning your deals ahead of time will serve you well. Consumers like to take advantage of Prime Day shopping to get high end items for less. Meanwhile, smaller items tend to do well by appealing to impulse buyers.
Advice for Offline Retailers
If you are an offline retailer, you might want to offer deals well ahead of Prime Day so that awareness spreads. Let potential customers who visit your store know of your special offers for Prime Day so they can return for more.
Tips for Ecommerce Retailers
Ecommerce retailers should target online buyers who are looking for Prime Day-related deals. For example, copying Amazon’s own strategy of using search advertising could yield good results.
In addition, spreading awareness about your Prime Day discounts through social media can help drive traffic to your online store. Partnering with social media influencers to promote offers is another way you can take advantage of online traffic to boost your Prime Day sales.
The Big Opportunity for Retailers
As more consumers around the world join Amazon Prime, we can expect Prime Day to become a much bigger event. Barely four years after Amazon launched the event, it has become a big opportunity for both retailers and consumers. Amazon is a big winner, on track to surpass $5 billion in Prime Day sales in 2019, but other retailers benefit from the consumer buying interest. Other retailers can run campaigns and discounts centered around Prime Day in order to boost their own sales.
SHARE: