TRY IT NOW
Retailers in Pole Position for Black Friday and Cyber Monday
In an era when iPhones and Android devices have made shopping from anywhere easier than ever before, sales events now happen as much in-store as online. Black Friday and Cyber Monday 2018 provide a golden opportunity for retailers of both types.
Laying the groundwork ahead of time is important. Here are some predictions and essential tips for how retailers can take advantage of Black Friday and Cyber Monday this year.
Prediction 1: Fashion and Apparel Rules The Day
One of the biggest opportunities in the Black Friday-Cyber Monday shopping patterns is in apparel sales. In the last several years, apparel/fashion sales have been far ahead of all other categories in sales revenue.
Shopify, one of the leading ecommerce platforms, aggregated category sales data over the Black Friday holiday season. In 2017, clothing sales led the pack across Shopify stores, with nearly 1.5 million orders, followed by accessories, which had nearly 1 million orders.
The following table lists Shopify’s five categories that had the best performance over the Black Friday-Cyber Monday holiday shopping cycle. 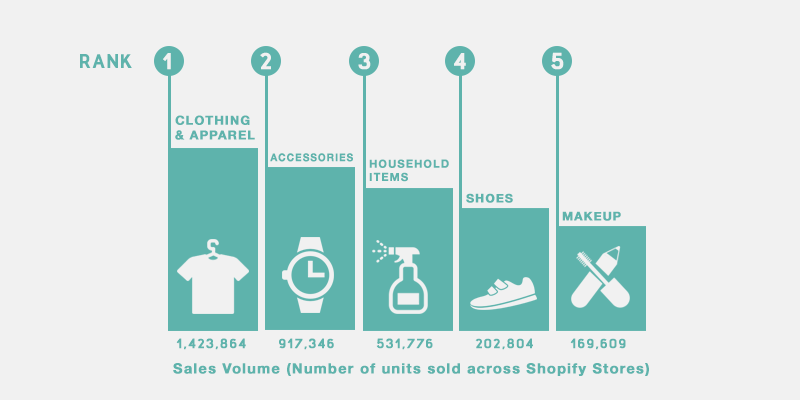 Table: Shopify Classification of 2017 Black Friday Sales
Shopify recorded $1 billion in sales over the 4-day shopping holiday, however, sales outside Shopify platforms were even greater. Collectively, in 2017, Black Friday-Cyber Monday sales were over $11 billion, according to data from TechCrunch. Other researchers put the figure even higher.
2017 saw a 23% bump in overall sales levels, according to data from Rakuten.
In 2018, we can expect sales to pick up in a year in which US GDP growth was over 3.5% annualized. This is the strongest the US economy has been in years. Not only will there be more sales overall, but merchants in highly popular product categories can expect to sell much higher volumes.
For the Black Friday holiday season in 2018, this is good news for apparel retailers, shoe stores, makeup brands, as well as sellers of household goods. Other product categories that should do well include electronics, food, and video games.
Prediction 2: Online Edging Out In-Store Sales
Buyers have increasingly turned to online shopping as a more convenient and efficient shopping channel. Shopping in the Black Friday-Cyber Monday sales events is not an online-only story, however.
Consumers have shown that they are willing to visit stores offline in order to hunt down a deal, even if they would not normally visit that store for routine purchases. The result is what experts are calling “omni-channel” shopping.
Retailers will need to make their deals visible and available both online and in stores, even while acknowledging consumers’ preference for online purchases.
In 2017, for example, data from the  National Retail Federation indicated that 58 million shoppers in the US shopped online only. This slightly edges out the 51 million who shopped only in physical stores.
These figures, however, were less than the 64 million who shopped both online and in physical stores. For 2018, expect this trend to continue, making omni-channel deals and marketing a must for retailers.
Prediction 3: Mobile Bigger Than Desktop
In the past, shoppers have shown a preference for desktop computers and laptops when making big ticket purchases. These are items like houses and cars, for which having a big computer can make research more efficient.
Lately, however, merchants and big platform sellers such as Amazon have made vast improvements to their mobile shopping experiences. This is a crucial difference maker because consumers are increasingly shopping from their mobile phones.
In 2017, for example, data on Shopify’s Black Friday sales indicated that mobile was now bigger than desktop, generating 66% of all sales. Many platforms still have to catch up, leaving room for mobile sales to grow in 2018.
However, only retailers with user-friendly product browsing and researching experiences on mobile will see improved conversions.
Prediction 4: Gen X and Gen Y Shoppers Spend The Most
Retailers will want to pay attention to the demographics of Black Friday and Cyber Monday in order to promote their sales. As in past Black Fridays, we can anticipate overwhelming participation from younger adults, particularly Millennials.
According to the Washington Post, Millennials between the ages of 25 and 34 were the biggest Black Friday spenders in 2017. While other shoppes spent on average $335 per person, Millennials spent $419 per person.
These same Millennials are also highly used to online shopping and shopping from mobile devices. Retailers will need to structure campaigns in ways that leverage the social platforms these young shoppers frequent.
Prediction 5: Increased Participation Beyond US Borders
Black Friday and Cyber Monday have brought the world of shoppers around the globe closer together than ever before. While the Thanksgiving holiday might be largely an American affair, not so the shopping spree that follows right afterwards.
Research from Periscope shows that consumers around the world, especially Europe, have begun to participate more and more in Black Friday.
Awareness of Black Friday is highest in the UK and Canada, where high numbers of shoppers plan to participate in the events. 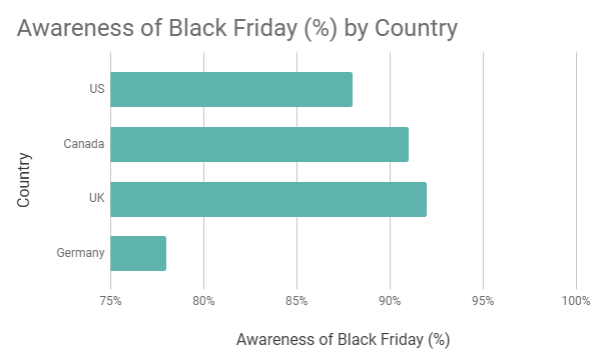 Since 2015, participation in Black Friday has grown by leaps and bounds in these and other countries. For example, UK participation was 19% in 2015, but had grown to 54% of UK shoppers in 2017.
If the trend holds, we can expect Black Friday sellers to make much higher sales figures in 2018 and beyond to shoppers outside the US. Internationalization and localized marketing can help retailers attract these international audiences.
Banking on Mobile and Omni-Channel Shopping
With estimates of Black Friday-Cyber Monday sales growth at around 23% in 2017, we can expect even bigger in 2018. This is due to a healthy economy in the US and Europe leading to increased consumer spending.
Shoppers plan to participate in Black Friday and Cyber Monday sales, with some allocating bigger budgets in 2018. Total sales, assuming a sustained pace of growth, could top $25 billion in 2018. Savvy retailers need to adopt mobile technology and omni-channel strategies to connect with shoppers looking for the best deals.
SHARE: